Ravenna, in Emilia Romagna, is the second largest city in Italy by extension. This charming city, a few kilometers from the sea, boasts some historical and artistic masterpieces.

Among these, we know today the Mausoleum of Theodoric.

According to a legend, someone predicted to Theodoric that he would die struck by lightning.

He therefore decided to have the building built to protect himself inside during any storm, thus avoiding the prophecy from coming true. Unfortunately, however, fate still found a way to come true and, during a downpour, lightning struck the building and killed the king who was inside.

The legend originates from a crack that extends for half of the dome and which according to some was caused by lightning, according to others, however, by a failure of the foundations. 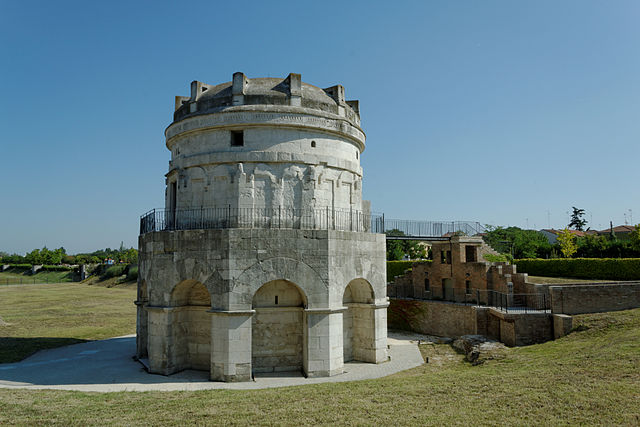 The mausoleum of Theodoric was built around 520. It is about 15 meters high and consists of two superimposed orders, both decagonal, in Istrian stone.

The first order has niches on each side, each covered by round arches. Inside it has a cruciform structure, probably because it was intended to be used as a burial chamber.

The second order has a circular plan on the inside and an ambulatory on the outside. Inside we can find a porphyry basin in which the body of the sovereign was kept, then moved during the Byzantine domination.

On the outside there is a unique decorative motif, which portrays a series of pincers. Most likely it is a motif borrowed from goldsmiths, a field in which the Ostrogoths were very skilled.

The peculiarity of this building is certainly the roof, consisting of a single monolith with a diameter of more than 10 meters, weighing about 230 tons.

Have you already heard of this wonderful Mausoleum? Book a guided tour with us to find out more.