In the Alto Adige region there is a lake with a peculiar history that has made it very famous: Lake Resia. Over the years, this lake has gained fame thanks to its curious tower that is submerged in the water.

Resia is located at 1498 meters above sea level and its lake is the largest in Alto Adige and is full of history, legends, and above all nature from wherever you see it. To promote it even more was the famous Netflix platform, which has created an online series called Curon, where the symbols and curiosities of this famous place are told. 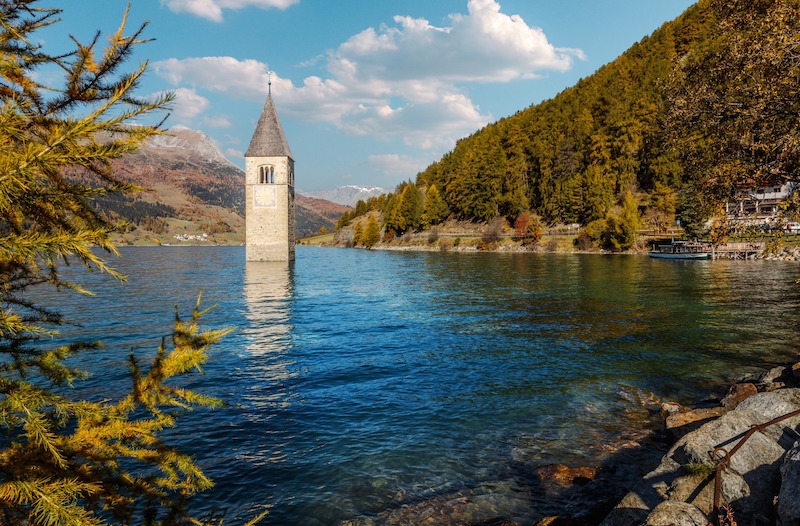 Behind this beautiful landscape photographed on different postcards, a painful story hides.

In the 30s, a great dike was made for the production of hydroelectric energy that would unite two of the natural basins of Resia. This work would allow water to stagnate up to 22 meters. In this project the population of Curon and Resia was totally forgotten. With the beginning of the Second World War, the project was abandoned and it was believed that this would be the case forever, however after the war the project was resumed. Thus, at the beginning of the 50s, thinking that everything would be ready, almost 700 hectares of land were submerged. The inhabitants lost their belongings and were forced to flee. They built a new place a few kilometers away, called Curon Venosta and thus began a new life.

The only thing that survived was the bell of the Romanesque church of Santa Caterina d'Alessandria, which dates back from 1357.

The inhabitants of the area say that on winter nights, when the lake freezes over you can get to touch the tower and some people even say they felt the noise of the bell.

Today this bell tower has become a symbol of the town and attracts many tourists as well as numerous photographers.

An event that you cannot miss in the Resia lake is the return to the lake. This race takes place every year in the month of July. This event attracts thousands of sports-loving tourists and also nature lovers. The particular thing about this event is that apart from the race, there are also other activities such as hiking, handbike, hiking, and others. Every day you will find a new excursion to take.