The Bomarzo park is located in a small town in the province of Viterbo. Bomarzo has only 1700 inhabitants and is famous for not only the Orsini Palace but also the mysterious Bomarzo Park, also known as Park of the monsters. The name of the park is due to its statues that have a monstrous appearance.

History of the Bomarzo Park

Bomarzo Park was built by the same architect who supervised the Villa Adriana excavations and creator of Villa d’Este, Pirro Ligorio. In 1547 Duke Orsini commissioned him to do this project just after he became a widower of Giulia Farnese. This park was thought by the Duke as a place of peace and quiet where you can relax. Orsini called this park "little forest" and dedicated it to his wife Giulia Farnese. This is undoubtedly a park without common things and has different particular spaces such as the leaning house and some enigmatic statues. Even the famous artist Salvador Dali visited the park and defined it as a unique creation in history. 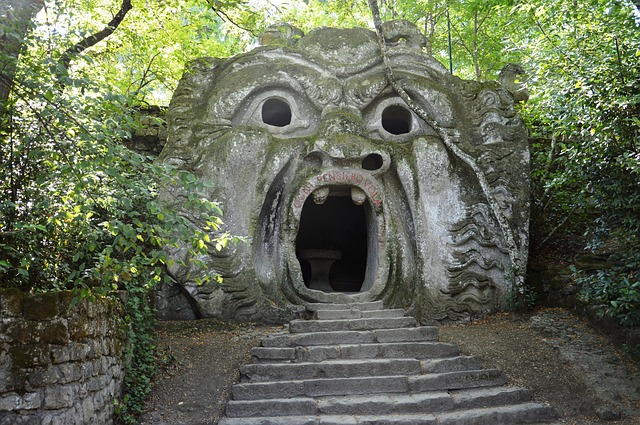 The park has more than 20 statues, all of different sizes but above all large. These were created based on the gargoyles and grotesque creatures that adorn medieval cathedrals. The most famous is the gigantic statue in the shape of the head of an ogre that has a stone table inside. In addition to this famous sculpture, there are others linked to death, which reminds us why the park was created (death of Orsini's wife).

After the death of Duke Pier Francesco Orsini, the park was completely abandoned until the second half of the XIX century. Years later the park was bought by the Bettini family who were the ones who took care of the restoration and then opened it to the public. Among the most frequent visitors are Salvador Dalí and Niki de Saint Phalle, the French sculptor who built the tarot garden.

Surely this is one of the most famous parks near Rome for its peculiarities and if you are in Rome do not miss the opportunity to visit the park of the monsters in one of our day trip from Rome.