Located between the sea and the high cliff, we discover the small and delightful Atrani: what to see? Physically almost united to Amalfi, it is located on a narrow strip of land between Mount Aureo and Civita, at the mouth of the Dragone Valley.

Squeezed between bold rocky peaks that loom over the town and the picturesque bay below, Atrani is the coastal center which, with its typically medieval structure, has best preserved its ancient topographical characteristics.

Founded together with Amalfi by Roman nuclei from Scala in Ravello, the name of Atranum combined its name with that history of the Maritime Republic of Amalfi, assuming the title of civitas.  It was an Etruscan or Greek stopover around the sixth century: around the year 1000 it was occupied by the Normans and later by the Swabians, the French and finally by the Spaniards.  In recent years the history of the village is linked to that of the Amalfi Coast.

Frequented and inhabited by the noblest families of the Amalfi Republic, Atrani crowned and buried the doges in the Palatine chapel near the church of S. Salvatore di Birecto;  it was sacked and destroyed by the Pisans in 1135 and 1137. In 1734 the Bourbons ascended the Neapolitan throne and with the new rulers there was a wave of culture and development.  In fact, along the valley of the Dragon paper mills, fabric factories and above all pasta factories, a more flourishing trade brought to the country.

Not far from the small church of Santa Maria del Bando, on the eastern side of Mount Aureo, there is a suggestive Grotta known as Masaniello, because the famous revolutionary who had Atranese origins would have taken refuge in it. 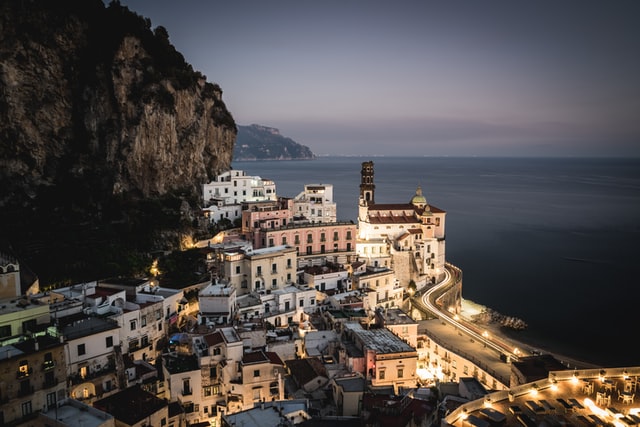 In 1923 Cornelius Escher arrived on the Amalfi Coast where he created 110 works which he defined as “… practical exercises…”.  His works depict the entire coast, but it was Atrani who exercised a particular charm on the artist: "the village" as he called it, attracted him to the "magical atmosphere" of the streets, and inspired him in his works.

The smallest town in Italy

The charm of this small village?  Seeing Atrani means getting lost in the smallest town in Italy by extension, an ancient village built in just 0.9 square kilometers, it has a small and protected beach where, in the evening, for fishing the lampara, which in the night dot the sea of a thousand bright spots.  In the village it is really difficult to privilege an itinerary;  its uniqueness is given by the compact beauty of the urban fabric, by the tangle of alleys, stairways and arches, by the contrast of lights and shadows of its characteristic squares, by the whiteness of the plaster, by the color of the gardens and orchards still widespread among the houses  .