Italy is the country with the largest number of places on the UNESCO list of world heritage sites.

Particularly in the Umbria Region, UNESCO has listed the beautiful city of Assisi, the place of the Franciscans, as a World Heritage Site.

The medieval city of Assisi is known worldwide because it was the birthplace of Saint Francis, the founder of the Franciscan religious order. This small city attracts pilgrims from all over the world.

Besides being a city of Saints, like San Francesco and Santa Chiara, the city of Assisi is a symbol of its messages of peace. This town welcomes pilgrims from around the world and is also very attractive for its natural landscapes, history and gastronomy. 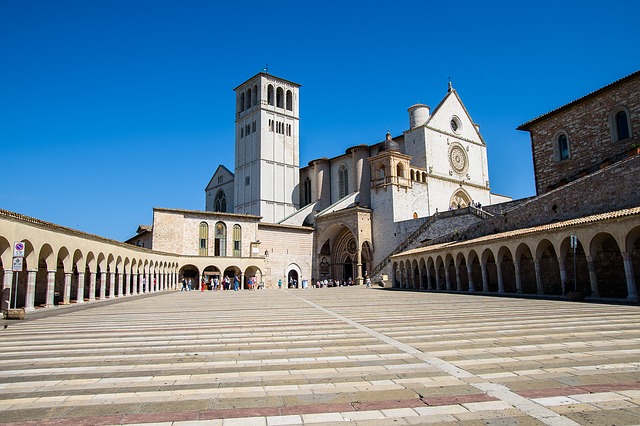 Inside the Basilica of San Francesco, you can find frescoes by the most famous artists of the 200s and 300s such as Cimabue, Giotto, I Lorenzetti and Simone Martini. This Basilica is made up of two churches superimposed on each other but at the same time two independent churches. The upper basilica has a gothic, bright and dazzling look, it became famous for the frescoes inside. The lower basilica is a little darker and more austere, it is decorated with works by the great masters of the Florentine school and dating from 1300, Giotto, Cimabue, Simone Martini and Pietro Lorenzetti.

In 1997 an earthquake caused deep injuries to the upper basilica and caused the dome to collapse in two places as well as extensive damage to the tympanum of the transept. Restoration work began immediately and was completed in record time to allow the marvelous basilica to be reopened.

In 2000, Unesco decided to insert the city of Assisi on the World heritage list. This is because the city represents a mixture of culture and a wonderful landscape. In particular the Basilica of San Francesco has been defined as an extraordinary example of an architectural complex that has even influenced the development of art and architecture.

Other Franciscan places that you cannot miss are the Plaza del Ayuntamiento that is located in the center of the city and the imposing Rocca Maggiore, home of the communal art gallery.