The charm of the lagoon enchants anyone who decides to wander through the streets of the historic center of Comacchio, a mix of narrow streets and canals enclosed in an atmosphere of other times.

Comacchio rises on thirteen islands, which today appears as a single whole linked to the mainland. The current village as we see it today, was born in the Middle Ages, even if several artifacts found make us think that it is much older. Its development certainly owes it to the salt flats. In that period Comacchio was the largest producer of salt in the whole area of ​​Ferrara and Ravenna. And precisely for this reason, as it was much disputed between the Venetians and the Este family, it suffered many ruins and submissions. Only in the seventeenth century, when it passed under the papal state, was it rebuilt by arranging all the canals and hydraulic works to facilitate recovery.

There are certainly many places to visit, but we want to start from the symbol par excellence of Comacchio: the famous “Trepponti”. Built on a project by the architect Luca Denasi, in 1634, they are undoubtedly the most characteristic monument of the village. At the time, the Trepponti served as a gateway to the city for anyone coming from the sea. 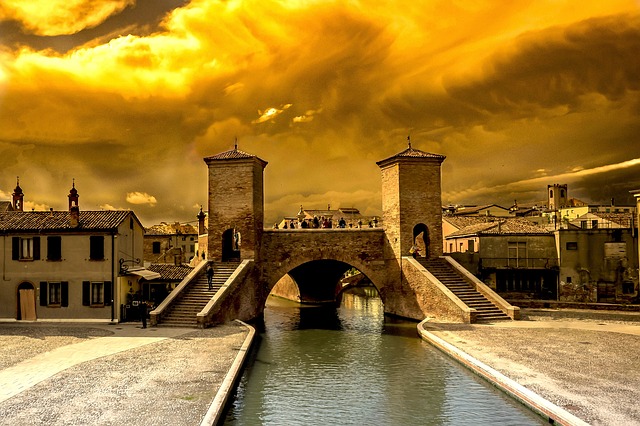 The canals of Comacchio are magical, a row of parked batanas await us eager to accompany us to discover the village, making Comacchio an even more fascinating place. The batana is a typical local boat, similar to a gondola with a flat bottom to allow fishing in shallow waters. Getting on board this boat, letting yourself be lulled by the water of the lagoon, is definitely an experience to do in Comacchio. Moreover, the boatmen, who cheer with many stories and curiosities of the place, only ask for an offer at will to maintain this activity, which in our opinion is really beautiful.

Among the things to see in Comacchio, take a look at the Loggia dei Mercanti and the Clock Tower. They are located opposite each other, right in the center of the town, as if to indicate the main directions for discovering Comacchio.

Continuing on you will come across the Palazzo Bellini di Comacchio, a nineteenth-century palace that takes its name from an aristocratic family to which it belonged. Today Palazzo Bellini is the seat of the Historical Archives and the Municipal Library of Comacchio. Inside, the Modern Art Gallery takes place with a calendar full of national exhibitions and reviews.

Walking through the canals of Comacchio, we find ourselves in the Carmine district and in the distance we see the oldest church of Comacchio. It is the Church of Santa Maria del Carmine and dates back to the 1600s. This small church is dedicated to the Blessed Virgin of Mount Carmel, and over the years it has undergone several renovations. Among these, unfortunately, also the demolition of the ceiling with the painting of the Madonna del Carmine. Instead, it preserves a precious wooden frame, where the Madonna and Child are depicted. 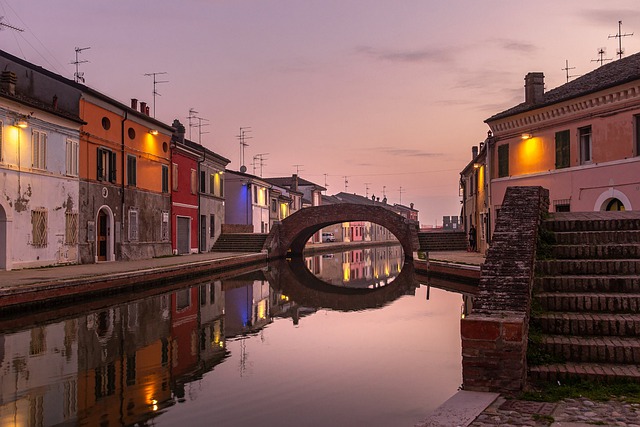 After a walk around the city, there is always time to stop in one of the wonderful restaurants.

It is not surprising that Comacchio's gastronomy is mainly based on fresh fish dishes, the king of the table. And it is not surprising even if in the dishes of the many restaurants around, we find eel, the queen of the Comacchio valleys, cooked in a hundred ways.

In short, this village is full of surprises, you just have to visit it and book a private visit to admire the magnificent monuments.