Everything you have to know about the sixth rione of Rome

Did you know that Rome is divided into different districts? The right term for the Roman district is “rione” and it coincides with a traditional administrative division of the ancient city center – the walled city –.

Would you like to know some more details about these “partition”? Today I am going to talk about the Parione neighborhood. It is considered the core of Rome, where you can have a walk even without an exact destination. Walking through the alleys you can admire the baroque side of the city: architectural and sculptural elements, great monuments and churches.

The name Parione derives from a huge old wall – once part of the rione – people used to call “parietone”, literally big wall. The wall probably belonged to the stadium of Domitian. Its logo represents a griffon that is a Greek mythological creature with the head of an eagle and the body of a lion: a symbol of strength, pride and nobility. The district obtained great importance mainly when the paving of one of its squares, Campo de’ Fiori, turned it into an important economic center. Between 15th and 16th century, lots of artists were appointed to embellish squares and buildings, typical of the Renaissance. The appearance of Navona square changed vastly thanks to the work of artists like Bernini and Borromini. Baroque and Renaissance started to coexist creating a magic atmosphere around this square!

What to see in Parione

If you are passionate about arts and history you can’t miss the most famous squares in Parione district: Campo de’ Fiori and Navona square.

Literally field of flowers, it is one of the most famous and cultured places in Rome, enduring since the 15th Formerly the site of inns for pilgrims and merchants, farmers from the surrounding hills started to get to Campo de’ Fiori to sell their products. Daily market, nowadays thanks to the number of restaurants and bars, at night, it turns into a meeting place for tourists and young people coming from every corner of the city. It is a vital square, mainly in the summertime when the noisy and funny atmosphere contrasts with the austere statue of Giordano Bruno placed right in the center of the square. It is a very famous monument representing a philosopher – Giordano Bruno – who was burnt alive for heresy – he shared the heliocentrism – on 17th February 1600. This is the most important event characterizing Campo de’ Fiori’s history and since then it became the square of freedom.

Not so far from Campo de’ Fiori you can have a walk in the famous Navona square. A place where street artists, painters and acrobats liven up the atmosphere. The legend goes that during the Roman era the square was filled with water for naval combats, though actually the reason was to soothe Romans during dog days. Commissioned by Pope Innocent X, its most important monuments are Sant’Agnese in Agone and the Fontana dei Quattro Fiumi (literally the fountain of the four rivers) with four statues representing the four continent known at that time: the Nile, the Gange, the Danube and the Rio de la Plata. Both works were realized by famous Italian architects: the former by Borromini and the latter by Bernini, who created their works in contrast. De facto on the façade of the Church, Saint Agnes’ statue has a hand on her chest and his eyes look at the fountain with disdain. In the same way the person representing the Danube in the fountain, holds its arms to defend the fountain itself in case the façade of the church will collapse.

How to get there

If your accommodation is located in Rome city center you can get to Piazza Navona and Campo de’ Fiori by foot. It will be a great walk through some highlights of the city! Otherwise, if you prefer to move by bus there are loads of them stopping in the proximity of the square like numbers 46, 62, 64, 81, 87, 492, 628 and others it depends on which is your starting point, just double check on the ATAC website to be sure. From Termini station you can take the 64 and then get off in Corso Vittorio Emanuele, it will take just 5 minutes to reach the square. Unfortunately there is no underground station at Navona square, but you can take the A line (the orange one) and get off at the Barberini stop. Then just walk for almost 20 minutes through the magnificence of Rome.

In Piazza di Parione (now known with the name of Piazza di Pasquino) it is located the first of the six "talking statues" of Rome: famous for the tradition to attach anonymous critics to its base.
The name of the statue is "Pasquino". Probably it derives from the name of an artisan near whose shop the statue was found. According to some other popular beliefs, he was a teacher whose students, having noticed some similarities with the statue itself, started to mock him affixing papers with messages on his neck.
The anonymous posted messages started to be also known as “pasquinate” from the name of Pasquino itself!

When in Parione, if you want to have lunch or just a break, all around the district there are restaurants and bars. Pay attention to tourist menus! Furthermore there are some traditional inns in Campo de’ Fiori where adult women use to show how to make pasta: don’t miss the chance to attend this performance and to eat some handmade pasta dishes, of course!

THE OTHER GUIDES TO ROME'S NEIGHBORHOOD 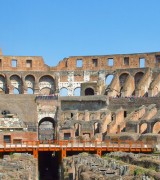 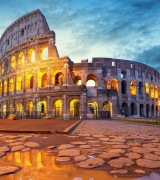 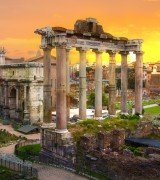 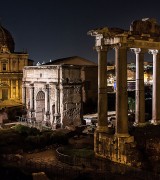 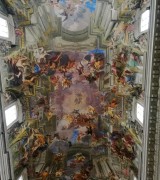